The Seattle Slug corrects the balance and handling problems in the Glock while serving as an effective magazine guide. Popular with law enforcement and competitive shooters alike, the Seattle Slug has won acceptance by officers and shooters across the West. Improves handling, improves reliability in weak-hand shooting, absorbs recoil, speeds reloads, and installs in minutes without modifying the gun. Available in brass (3.5 ounces) and black anodized aluminum (1.1 ounces, slightly less in 19/23). The first and best of its kind. Available for all models except 26/27, 29/30, and the SF frames.

Our current slugs are built around the “Gen. 3” frame, and will fit/function well in the “Gen. 2.” They WILL NOT fit the “Gen. 4” frame. We have a version for that on the way. Please specify what “Gen” you own when you order.

Many years have passed since a guy walked up to me at a USPSA match and sold me a crude brass heelweight for the Glock with a sort of extension on the end. (He had them in a Ziplock baggie.) He sold one to me, and to other shooters that were trying to shoot USPSA/IPSC with the hard-recoiling, light-for-caliber Glock 22.

The part helped with recoil, but the way he had it set up, it actually made the gun speedload worse than the stock gun (sort of the way the copycat “Slug Plug” does now). I laid some epoxy onto mine, re-shaping it so it would work, and waited for the commercial version to come out.  I waited a year or two. The guy with the baggie disappeared, and eventually I decided to make one myself.

That was the start of “Taylor Freelance.” I was living in Ballard, Wash., shooting just outside of metro Seattle. The resulting parts looked alarmingly like a banana slug (a yellow snail without a shell common to the Northwest), so we started calling them a “Seattle Slug.”

The Slug was the only really viable magazine guide available for the Glock at the time, and was instantly popular with the small slice of competitors using the Glock in USPSA/IPSC nationwide.

I designed the part as a compromise between a “competition” part, and a “tactical” part. Originally I’d intended to do a concealment part (like the Jentra butt caps available now), but the Seattle Slug worked so well, I couldn’t see making ANOTHER part to do the same thing.

WHY DO I WANT ONE?

The Glock’s lightweight polymer frame offers the shooter a compromise. The light weight makes it easy to carry, but doesn’t absorb much recoil, and offers no significant weight to balance out the relatively heavy slide. As you run out of ammo, the Glock’s recoil signature changes, becoming very “whippy” in the hand. The lack of weight in the frame also makes the gun (rather famously) prone to “weak wrist” malfunctions. The recoil-operated action needs to recoil against something in order to work, and if you don’t hold the gun properly, the entire gun will move rearward instead of just the slide.

The Seattle Slug provides extra weight to absorb recoil, counterbalance the weight of the slide, and give the gun a little something extra to work against before the gun recoils into your hand. It’s also an effective magazine guide, letting you load off the back of the magwell instead of aiming for the front (as one must to avoid hooking the rim of the topmost cartridge in that gaping hole at the back).

The slug is no wider than the frame of the gun, and protrudes only slightly beyond the length of the installed magazine. Since it works off the back of the gun only, you can use stock magazines and seat them properly without the extensions required by competition parts. Just as important, you can reach up and strip out a stuck magazine without having to reach up inside a steel ring to grab an extension with your fingertips (as you would with a competition part).

It conceals well, reloads well, and calms the recoil down considerably.

HOW WELL DOES IT WORK?

The Slug works so well in that compromise role that it’s now the only part banned BY NAME by both USPSA and IDPA for use in their “Production” and “Stock Service Pistol” divisions.

In USPSA’s more free-wheeling “Limited” and “Limited-10” divisions, Robert Vogel took a Seattle-Slug-equipped Glock 24 all the way to the top — becoming national champion several times over.

Seattle Slugs are issued by Lake Forest Park P.D. (near Seattle), and are a popular accessory with members of King County Sheriff (Seattle again) where they’re endorsed by their chief firearms instructor, Darrion Holiwell.

The instructor at Lake Forest P.D. called us a while back to report that thanks to the slug and some of our solid brass floorplates, one of his female officers was able to up-gun and qualify with their issue .40 caliber Glocks, rather than the less-powerful 9mm.

As a guy that likes designing parts for guns, I couldn’t ask for a happier story than that!

While I understand using a competition-only magwell for competition purposes (see our store for examples), the Seattle Slug holds its own. In the 3-Gun world, my friend Patrick Kelley continues to campaign with a Seattle Slug in his Glocks (winning the USPSA “Heavy Metal” 3-Gun title in 2007), as do a number of others — including 3-Gun whiz Robert Romero.

I use one in my G21 for bowling pin shooting in particular, where I team it with our brass floorplates (a la that gal at Lake Forest P.D.) to get the most control over those hot .45 ACP handloads.

The main complaint we’ve heard over the years pertains to the slug’s color: shiny brass. That’s no longer an issue.

Mr. Holiwell and a crew of testers at King County Sheriff did some experimenting with sample Slugs done in “Graphite Black” and “Black Mag II.” After several months, we adopted “Graphite Black” as the standard. It does a remarkable job blending with the slightly grey-black color of the pistol.. King County got them first, and have been regular customers ever since. 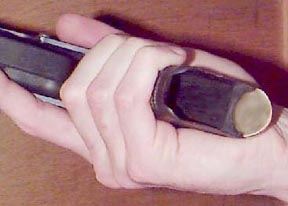 Should You Use a Slug?